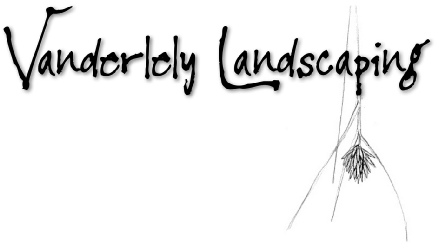 Gina Frederick studied sculpture and graphics at Bennington College in Vermont, graduating with a BA in 1995. The use of natural materials and creation of outdoor sculpture installations which developed at Bennington evolved into community-centered gardens and youth art programs during graduate studies at Tyler School of Art.  Gina began work on the LaMott Community Garden in Cheltenham, PA in 1997 and her work in the garden and within the community continued for many years after her graduation in 1999.

Vanderlely Landscaping is owned by the husband-
and-wife team of Henk Vanderlely Jr. and Gina Frederick. The couple met at Tyler School of Art in Elkins Park, PA, where they received their Masters of Art degrees.

Art degrees. During their graduate studies at Tyler, Gina and Henk became interested in horticulture and landscape design. This interest lead to work in the nursery industry and landscaping firms. It is the integration of artistic sensibility and the knowledge and love of native plants that
informs and sustains the work that is done by
Vanderlely Landscaping. 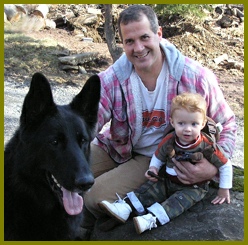 Henk Vanderlely, Jr. studied photography and ceramics at Arcadia College in Glenside, PA, where he receiived his bachelors degree in 1997. While studying ceramics in the masters program at Tyler School of Art, Henk began creating ceramic watering cans and bonsai plant containers which were the subject of his MFA Thesis show in 2000.

HENK AND LEO WITH GOOSE DOG

Henk’s efforts are now largely spent in the areas of landscape installation, maintenance, and stone work. His eye for detail and appreciation of visual coherence are evident in all of his work. 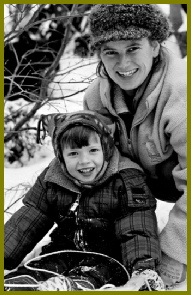